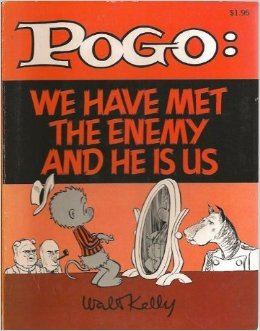 April 13, some of the best engineers in the world will come to New York and plant cable's flag at the heart of the wireless world. After the event, no one should doubt that cable be a player. Featured speaker Ted Rappaport leads perhaps the world's best wireless research center at NYU. Rahim Tafazolli at Surrey and Gerhard Fettweis at TU Dresden have groups that are contenders for that title. CableLabs is organizing the event and sending their best.

I call Ted, "The Prince of 28 GHz." Ted's group convinced the industry that 28 GHz mobile can work by taking a test rig around Manhattan and Brooklyn for thousands of tests. He's a dynamic speaker and a reason 5G high frequencies lead the discussion. Possibly the toughest question in future wireless is whether millimeter wave or many antenna MIMO will dominate. Both will be the right choice some places. High demand and concentrated customers call for the capacity of millimeter. The greater reach and probable lower cost of many antennas (MU MIMO) in lower frequencies are more likely in less dense regions.

Top analysts Jonathan Chapin and Paul de Sa will discuss ways cable could become the best wireless networks in the United States. Day One, they can have over 10,000,000 cell sites simply with the WiFi in home gateways.

The telco problem is how to sell all the capacity coming online. Cisco's Visual Network Index offers the best data anywhere on current mobile trends as well as respected future forecasts. You can spend hours on the report. Skip quickly over the discussion at the top, which emphasizes select data points suggesting growth. Jump into the charts and tables. Here're some of the first things I noticed. 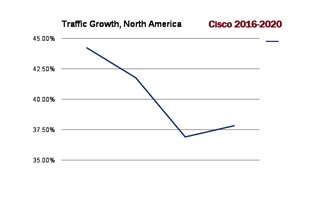 Growth in the U.S. is down to 50%/year and predicted to fall below 40%. Traffic soared as people first acquired smartphones, over 100% for a couple of years. 75% of the devices in the U.S. today are smart. "Average smartphone usage grew 43 percent in 2015. The average amount of traffic per smartphone in 2015 was 929 MB per month, up from 648 MB per month in 2014." The smartphone conversion still has a way to go, perhaps to 95% in a few years. The new users will continue to raise the growth rate, but much less than in the past. On the other hand, only 12% of the devices in the Middle East and Africa are "smart." $50-$100 smartphones are already changing that rapidly. Cisco expects the percentage to rise to over 50% by 2020, driving traffic growth rates much higher. Africans are buying so many smartphones there will be more Africans on the web than Americans around 2018. Detailed table below

The economic impact of wireless growth will approach insignificance in the developed world.

Within the year, hoping to increase fixed wireless speeds 50+%. Telecom Italia deployed a Kumu unit in Turin for LTE backhaul using the full duplex bandwidth. The 3GPP standard has included "LTE Relay" since 2009 but that hasn't been practical. Qualcomm is sampling the Snapdragon 820 Cat 12 LTE chip, capable of 600 megabits. TI thinks they've found a backhaul solution.

World-leading engineers believe wireless capacity will grow at least 50x in coming years. They include Marconi Prize winners Marty Cooper, Arogyaswami Paulraj, Henry Samueli and Vint Cerf. MIMO will yield at least a 10X improvement. AT&T and Verizon both have enough unused spectrum to double or triple current LTE capacity. Full duplex has the potential to double everything, and the researchers are confident of at least a 50% improvement most places. Back of the envelope, I believe a 25X increase in wireless capacity is possible without raising capital spending.

Nearly 50% price drop with new entrant into the world's most competitive market. Update 5/11 ET points to October for the full launch http://bit.ly/1Tac78M Mega-billionaire Mukesh Ambani has built a 4G network to 70% of India, with 90% expected by the official launch. Reliance Jio will bring in lower prices, $60 LTE phones and should be the most important telecom event of 2016. Reliance Jio is already running a large beta with employees and setting up dealers.

To fill that network, Ambani is offering one of the lowest prices in the world. He's already taken delivery on half a million SIM cards and requesting proposals for $50-75 mobiles in the tens of millions. The other big Indians telcos (Bharti, Vodafone and Idea) have responded by moving up their own 4G buildouts, which will soon take over the country. The increased investment is yet another confirmation that competition, not company profits, is the key determinant of investment. They will presumably reduce prices soon as well.

Ambani initially will concentrate on fixed wireless for broadband rather than mobile voice. 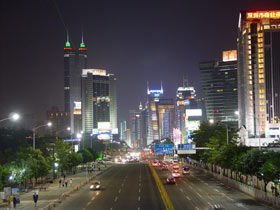 Market for mobile chips disappearing. When Henry Samueli shut down Broadcom's cellular baseband business, I happened to be visiting one of the founders. Many of the 3,000 engineers affected were his friends and the pain was apparent. However, I could see why the decision was necessary. Apple and Samsung dominate the mobile phone business and each made their own chips. Those two companies had growing market share and there just wasn't enough merchant business to sustain the chip vendors. Qualcomm's scale gives them a major advantage and the very efficient Mediatek has also grown.

Huawei, #3 or #4 in cell phone sales, is taking a similar path. Top analyst Linley Gwennap (quote in the headline) is enthusiastic about the new Huawei chip. He believes, "The new chip will outperform both the Snapdragon 810 and the Exynos 7420 on most mobile benchmarks, setting a new bar for smartphone performance." 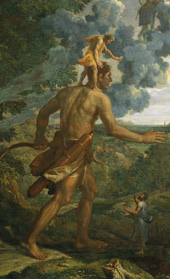 and Verizon could easily triple their network capacity without breaking the capital budget. The technology is obvious but the change in business models is unlikely. Sprint has remarkable holdings around 2.5GHz. Dish spectrum is totally unused.

There's enough available spectrum to build at least three Verizon-sized networks. The currently allocated but unused spectrum is allowing both AT&T and Verizon to double their wireless capabilities. I wrote this article because <yet another generally very knowledgeable> person just left that doubling out of his predictions. It's commonly overlooked.

My estimate is that spectrum, advanced technology and investment can easily provide a 25x gain many without blowing out capex budgets - if policy is smarter.  The increased costs should be no more than 2% of sales and probably much less. 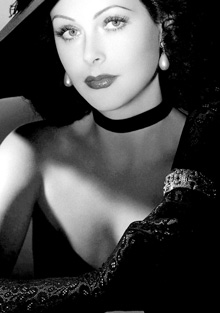 Little chipmaker Semtech seemed to be tilting at windmills until Bouygues turned on Grenoble and Paris. Bouygues plans 20 cities in France by the end of this year. France Telecom responded they will cover "the entire nation" by the end of next year. Now Tata, a $100B conglomerate, announced they will serve 400M people in India's cities. Swisscom and KPN have announcements.

Verizon and Nokia refuse to wait for 2020 for 5G. Massive MIMO promises major speed jumps in the same spectrum. Testing in 2016 for Massive MIMO, beamforming and interference cancellation. Hopes for huge speed boost starting in 2017. Think 64 antennas and 5-10x throughput. Good engineers tell me it's possible but didn't expect it so soon.

Beginning trials soon would suggest deployment in 2017 if they go well. That's not guaranteed. Lowell McAdam plans "Staying ~two years ahead of competitors in network performance." They are getting ambitious, including going to Alcatel's TWDM PON for 40 gig. "VZ will soon begin market trials of 5G capabilities including 'massive MIMO' (which is when a large number of antennas are packed into a single device) and beam forming (which is when a wireless signal is concentrated on a specific location)."(Paul de Sa) Much more http://bit.ly/5G256Ant