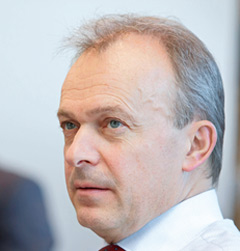 "We see traffic doubling every 12 months but we don't have quality problems in the network." Urs Schaeppi, CEO Swisscom, on the investor call. "Do we run into congestion problems? No, we will be able to manage it." Swisscom's business model is to offer outstanding service at a premium price, which they have generally done well. Schaeppi closely watches the quality of his wireless network.

At Vodafone, CEO Colao reports "60% of growth in data [but] our network utilization went up only one percentage point." He adds technology is driving down cost per gig by, "40% year-over-year." David Small of Verizon also estimates cost drops of ~40% per year. Depending on who is estimating, the move from 3G to 4G LTE reduced costs from 50%-90%. We're seeing a similar fall as telcos go from LTE to LTE Advanced.

Capital spending has generally been going down and often is actually below depreciation. Most wireless companies have no net investment.  Telcos are now bonding two or three 20 MHz bands, for a corresponding capacity increase; four bands are now possible. The upgrade for "carrier aggregation" is mostly software in recent generation cell sites. The next step, going to two and four antennas (2x2 & 4x4 MIMO,) requires only a modest hardware upgrade.

Around the world, wireless speeds have been going up dramatically since Jim Cicconi, AT&T's great lobbyist, insisted  decade ago we faced a "spectrum crisis." 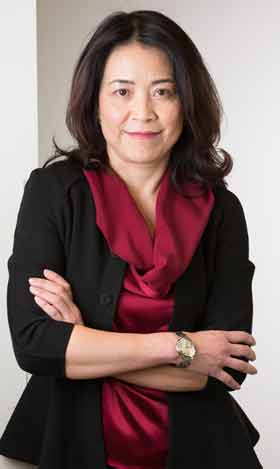 Selina Lo Ruckus3.5 GHz band ready to take off with TD-LTE as 5 GHz Wi-Fi hits congestion. Everybody wins if you connect in-building with Wi-Fi or shared TD-LTE rather than a network that only works for one carrier. The same applies to stadiums. A football team wants good service for all the fans in the seats, not just those with Verizon phones or whichever other carrier is first to build. Companies renting space today expect their cellphones to work, even in interior parts of the building. Real estate owners are building out small cells/DAS in most major commercial buildings, often working with third parties.

Today's Wi-Fi can reach speeds over a gigabit in the 5 GHz band. The newly available 3.5 GHz spectrum can offer more capacity as it is needed, especially in the U.S., where an amazing 150 MHz is available many places. That's enough for three or four Verizon-sized networks, available without a spectrum fee.

Ruckus' OpenG is designed to make the shared network easy to administer.

"The new program’s cost to Sprint is minimal" 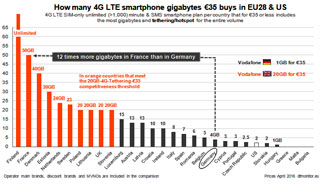 NYT reports from CEO Claure. Reporter Cecilia Kang adds, "It doesn’t require additional network upgrades; instead, it would be the equivalent of adding more cars to a highway, the company said." That's an exaggeration, of course. Sprint may have the emptiest network in America, but some of their $3B capital budget is required for the congested areas.

The cost of bandwidth, even on mobile, is low and getting lower rapidly. A recent EU study found fully loaded cost often one euro/gigabyte or less. Consultant Antonios Drossos emails, "the actual incremental cost of mobile data which depending on the network topology, configurations, vendor pricing etc ranges from €0.05/GB to €0.5/GB."

Drossos is more likely on target. Free in France and several in Scandinavia are selling 50 gigabytes+ for $22.  Even if we assume people only use half their allotment, that's 80 cents retail for a profitable product. Ambani in India is selling 10 gigabytes for $7.40.

David Small of Verizon estimates the cost per bit will go down 30-40% per year, confirming what I’ve written about the efficiency of carrier aggregation, advanced LTE & MIMO. That’s a drop of about half in two to three years and three quarters in about five years. 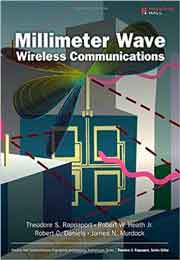 A chance to watch.  Press releases sometimes are as credible as politician's speeches, so I'm looking forward to watching Tuesday's live demo of a 5G network. At the Texas Wireless Summit, Arunabha Ghosh of AT&T will present Designing Ultra-Dense Networks for 5G at 9:40. At 10 a.m., AT&T will demonstrate their state of the art 5G testing. This will be one of the first public demonstrations of a 5G mmWave system. Webcast by RCR Wireless.

AT&T & Ericsson are working on phased arrays with ultra-fast beam steering, feedback-based hybrid precoding, multi-user multiple-input/multiple-output, dynamic beam tracking and beam acquisition. Beamforming and related technologies seem may be a breakthrough that extends the reach and throughput of mmWave systems. mmWave Works!, as Ted Rappaport proclaimed a few years ago. The question now is where it will prove financially practical. All those small cells and backhaul can be very expensive.

The day will mostly be devoted to connecting and automating cars, with top speakers. Robert Heath of the University of Texas is one of the organizers; he co-wrote the book on millimeter wave and is working to solve some of the remaining problems. 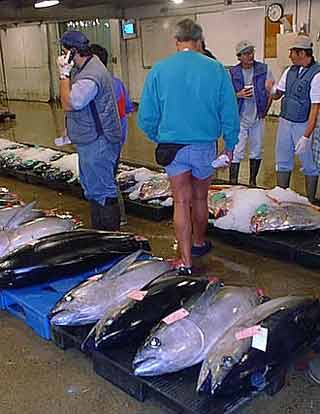 fish auctionHigh reserve protected against giveaway pricing. The telcos got the spectrum they can put to use for $10B, about all they could spend. In two to four years, the government likely can re-auction the unsold spectrum for a much higher price.  Normally, it's a good thing to put spectrum to use. In this case, most would have gone unused if transferred to the carriers.

Manoj Gairola echoed other reporters in Spectrum auction fiasco: DoT should come out of denial mode and introspect. I disagree that "The latest Spectrum auction has failed." Nearly all analysts agree that companies like Bharti and Idea are facing serious issues with their balance sheets. Vodafone had to pump $7B in Vodafone India. They didn't have the cash to bid much more. They couldn't have afforded to spend more. The Indian telcos are struggling to finance the buildout on the spectrum they have bought; it would be impractical for them to buy and then build the 700 MHz band. Goldman Sachs had predicted the companies wouldn't spend more than $7B. "Higher debt levels following the auction and lower profitability from pricing pressure will likely raise industrywide leverage,” Annalisa Di Chiara of Moody's concluded.

Sunil Bharti Mittal, head of India's largest phone company, agrees the companies got what they needed. “Spectrum was one of the biggest issues that has been resolved to a very large degree. Lots of spectrum was put up on the table. Most has been picked up and more will be picked up. I think the rollout is now accelerating.“ Minister Sinha adds,  “I totally disagree with the statement that this spectrum auction was a `failure' (according to newspapers) ... I think Digital India will get momentum after this spectrum auction.“

Many would be ~ five cents/month. AT&T new IoT pricing can deliver 3 megabytes to 300 devices for 8 cents/month each. This price is an order of magnitude cheaper than any telco IoT offering I know and beats most prices of LP WAN. Many IoT devices require very little data. Your blood pressure monitor or scale is likely to upload a few times a day or fewer. Your smart electric meter does not need to be sending continuously for most purposes.  Turning on your air conditioner or coffee maker when you're headed home requires only a few bits. Your baby monitor camera or Pandora in your car may require more, but there soon will be billions of devices that don't need to say very much.

Most telcos are looking for a dollar or more for each connected device. I think that will drive people to Wi-Fi instead, especially because the Wi-Fi chip is much cheaper than LTE chips. Telcos have high expectation for IoT, but nearly all is going Wi-Fi today.

AT&T is charging in with extraordinary pricing for projects that will have 50-1,000 nodes. $25 buys you 1 gigabyte, delivered to hundreds of locations, $60 covers 3 gigabytes,

128 antennas, 6X-10X improvement in throughput to ?1.5 gigabits. The fearless Masayoshi Son wants to change the world again, this time by launching 5G. They have deployed 100 cell sites in 43 cities, with many in Tokyo. He may be a year ahead of anyone else. Masa-san wasn't patient enough to wait. (I'm mostly working in Google translation from the Japanese, included below.)

Softbank subsidiary Wireless City Networks is taking charge. They may be using the ZTE 128 antenna unit demoed last year. Cell siting is particularly difficult in Japan and MIMO is the best way to get much more out of your existing network and spectrum. On the other hand, Softbank controlled Sprint has 120 MHz of unused spectrum. Sprint's logical path forward begins with carrier aggregation putting that spectrum to use.

Tom Marzetta of Bell Labs has been called the "Father of Massive MIMO." His 2010 paper, Noncooperative Cellular Wireless with Unlimited Numbers of Base Station Antennas, has been cited over 1700 times. He and Bell Labs colleague Gerry Foschini have been working on MIMO since the 1990's and made many contributions. For those who want to understand in depth, I've included the abstract of that paper and others below.

In 2014, Tom told me he thought it would take several more years for practical systems. Masayoshi Son of Softbank was unwilling to wait and launched the first commercial deployment in September, 2016. Softbank is installing 100 systems across 43 cities in Japan. Softbank's early results, from five cities, show a 5X to 10X improvement in the same spectrum. They use 128 antennas. Some of the antennas are used for "beamforming," which is proving crucial for deployments.  Many top engineers expect a 50X improvement from MIMO in the coming years. Remarkably, the increased performance does not require significantly more power.

Marzetta writes, "Massive MIMO is the most promising technology available to address the ever increasing demand for wireless throughput: