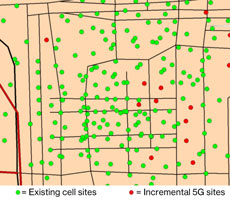 The result is that far fewer new cells are required. The green dots are where Verizon already has cells. As you can see, there are few red dots for new cells. The cost is coming in so low Verizon does not expect to raise their capital spending. "Management stated that overall capital expenditures would not change substantially during the 5G rollout as internal resources are shifted from the 4G to the 5G platform."

It will be fixed only in 2018, with Verizon promising to support mobile as soon as the technology is available. Intel and Qualcomm expect 5G phones in production in 2019.

Ted in 2013 startled the industry with his article, “Millimeter wave mobile communications for 5G cellular: It will work!” Now that Verizon is proving it does work, Ted has earned his Marconi Prize. In the chart, the NYU model is in blue and the traditional model in red.

Verizon will do five cities late in 2018, starting with Sacramento, an AT&T town. They look to sell triple play (including video and voice) or quadruple play (adding mobile.) They promise competitive prices, which will be required to reach their goal of 30% market share. 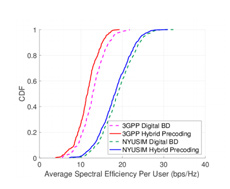 Both Verizon and AT&T expect whoever covers a city first will win 20% to 40% away from cable or DSL. It's a land grab situation, which I expect will inspire AT&T to move fast as well.

Verizon will probably choose two vendors among Ericsson, Nokia, and Samsung. Samsung had few 4G builds outside of Asia, but has been investing heavily for half a decade. Samsung researchers, led by Wonil Roh, are leaders in the field. Ericsson & Nokia are hoping Verizon is just using Samsung as a stalking horse and will ultimately split the contract between the two of them. I'm sure intense negotiations are underway to complement the extensive testing.

I was surprised Calix and Adtran didn't rise on the news. They are supplying Verizon with NG-PON2, Verizon's 40 gigabit choice for backhaul. NG-PON2 is the choice of advanced telcos in the west. In China, it will be 25 & 50G Ethernet instead.

As a first application of fifth-generation – or 5G -- wireless, these services will use radio signals, rather than copper or fiber cables, to provide customers with unprecedented wireless speeds for Internet access. As 5G continues to evolve, customers will benefit from a wide array of services – including broadband, mobile and IoT (Internet of things) -- and the necessary bandwidth and low latency for 3D and virtual reality applications.

Verizon's first commercial launch is planned to be in Sacramento, Calif., in the second half of 2018. Details of that launch, and the announcement of additional markets, will be provided at a later date.

Verizon has successfully trialed 5G residential applications in 11 markets in 2017. The commercial launch is based on customer experience and on Verizon's confidence in new technology powered by millimeter-wave spectrum.

The 5G commercial launch will not have a material impact on Verizon's consolidated capital expenditures in 2018. The company expects its full-year 2018 capital spending program to be consistent with the past several years.

"This is a landmark announcement for customers and investors who have been waiting for the 5G future to become a reality," said Hans Vestberg, Verizon president of Global Networks and Chief Technology Officer. "We appreciate our strong ecosystem partners for their passion and technological support in helping us drive forward with 5G industry standards, for both fixed and mobile applications. The targeted initial launches we are announcing today will provide a strong framework for accelerating 5G's future deployment on the global standards."