This remarkable chart from Phil Kendall is worth intense study. (Larger below) It shows the wireless cost per gig has gone down 88% in 5 years.

Prices continue to fall rapidly except in the US, almost flat the last three years. In competitive markets, price drops should continue as Massive MIMO, carrier aggregation, and other tech improvements will continue driving costs down.

Worldwide traffic growth is down to 35%; I've noted many developed countries are now below 30% and falling. The explosive growth is over in much of the world, although the pandemic may create some anomalies.

Verizon and AT&T estimate  40% per year fall in cost per bit. The world average is certainly over 30%. Revenue and profit have been roughly flat despite traffic growth that until recently was over 40%. If productivity hadn't improved at a similar rate, profits would have fallen sharply. I haven't seen 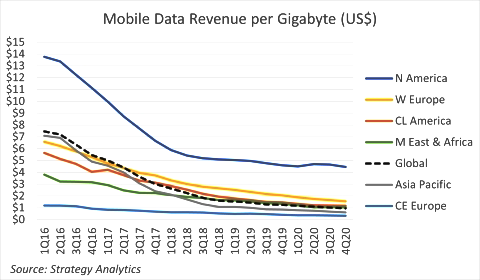 China and India have a significant volume influence on global revenue per Gigabyte, averaging just US$0.55 and US$0.10 respectively in Q4;

Most dramatic in the chart is the increasing gap between the US and Western Europe since 2018. US prices are now twice the Europeans and four times the world average.