According to a thoughtful 47-page analysis by the world's #3 manufacturer of 5G, Nokia. Looking at the top eight 5G use cases, Nokia confirms

"All are feasible with 4G."

The inference: 5G is not essential for most of the progress in these areas*. As I looked further into each of these areas, it became clear none of them are likely to drive demand growth sufficient to raise carrier revenue significantly. **

5G will be good for the industry because it will lower costs and increase capacity, not because of new uses. In addition, most consumers believe the myth of 5G miracles and are likely to buy. One million Koreans signed on in the first two months.

5G phone prices will drop significantly sometime in 2020; China Mobile and Huawei predict prices from US$150 to US$300. At that point, I expect very rapid demand growth.

As Dean Bubley points out, we already would be seeing in the 4G era significant growth in any of these applications which have high demand in the near term. We aren't. Actually, the rate of wireless traffic growth in the West has been falling. Cisco, Ericsson, and your author expect the growth rate to continue to mostly fall.

My guess is this will not change significantly past the 4-5 years of this report. The rate of technology change communications is so high any projections past 3-5 years are likely to be wrong.

In particular, autonomous cars and video do not appear likely to require bandwidth that would break the trendline. Several applications likely to grow slowly are worth cultivating for future possibilities, especially AR & VR.

Here are two illustrations. The first is from STL, showing estimates of low growth. Almost all analysts have similar conclusions. The second is the Nokia chart, larger.

*The inference would not be true if the 4G networks will run out of capacity. Fortunately, 4G technology already deploying can raise capacity 10X to 25X at a reasonable cost. Traffic growth is slowing significantly, except in China and India. Cisco estimates wireless traffic growth in the U.S. will fall to 30%/year by 2021. I have many confirming datapoints. Conclusion: Within today's carrier capital budgets, almost all Western carriers can supply the capacity needed through at least the middle of next decade.

**The possible exception is fixed wireless, especially where Verizon will offer gigabit mmWave. In most countries, fixed wireless will likely be limited. 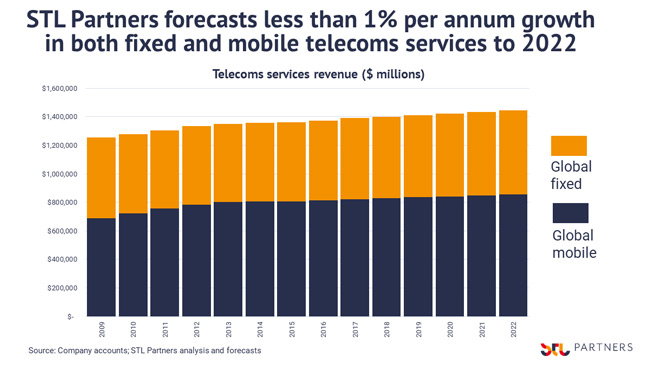