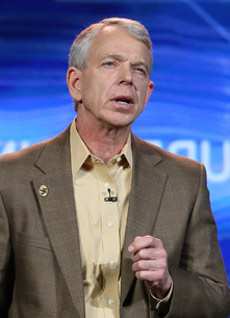 September 13's announcement by Lowell McAdam will go down in history as the date of the first real 5G mmWave deployment. True speeds of a gigabit are possible, rather than the 100-300 megabits more common with "Gig LTE."

We literally have hundreds of cell sites that we have up and operating and 8 markets moving to 11 markets. The global standards will be done we believe sometime this year. The chip manufacturers will have chips available in the first quarter next year for us to incorporate that are on the global standards. So this platform is not two or three years out the way it was a year ago, it's on our doorstep and I think it's going to be huge.

Fixed only at first, competing with cable. It will be 2019 or more likely 2020 before substantial numbers of mobile phones will be able to connect. Both Qualcomm and Intel have thousands of engineers at work and are optimistic about chip delivery dates. It will not be easy.

Verizon needs 5G more than any other company on Earth. Its business model is based on being better and able to charge a premium price. AT&T and especially T-Mobile have caught up in important ways. Independent testing by Open Signal has T-Mobile faster in many cities, although Verizon data disagrees.

The takeaway is the difference is small. Verizon's Serious Problem: They ain't much better.

Being world-first in 5G will enhance Verizon's image even before it makes a practical difference in the network. That alone will more than cover the first two years' costs. 2% of $130B is more than any incremental investment. The stock is down $30B against the Dow - they need to improve their image.

With a CEO justly proud of the network he built and a smart, committed group of engineers, Verizon is moving ahead. With a $17B capex budget, Verizon can afford to take the risk.

"Hundreds of sites" in "11 markets" are not a test or a trial. This is it. In May, I wrote The $20B 5G Build: The Evidence, I believe the first report that Verizon had decided to spend $20B for mmWave to a third of the U.S., but even I didn't expect so much, so soon.

McAdam said 5G capex will be low for at least the next few years. He confirmed he can meet his goals within the (reduced) $17B capex level, at least for now. He made a point of of saying, "for now," leaving open the possibility of an expansion after ~2019.

After 2019, Verizon can choose to go incredibly fast. The systems will be field-proven and dedicated chips for cells and phones will be in production. They covered 95% of the U.S. with LTE between 2009 and 2011, nearly 300M pops. Lowell, now CEO, planned and built that network, by far the best in the world in the day. mmWave needs 10 times as many cells. I originally guessed a third of the U.S. by ~2022, but have little solid data. Barring engineering surprises, Verizon could cover > 90% of the U.S.

18 months ago, the best in the business thought mmWave was 2020-2023. To the surprise of almost everyone - except Ted Rappaport - the engineers have done much better than expected. Using intelligence to direct the beam is working especially well. Beamforming isn't a new idea, but enormous progress is being made in using many antennas. At mmWave frequencies, antennas can be very small. 256 antennas fit in a module the size of a large chip. The algorithms and manufacturing will see enormous improvements, but the results are already outstanding.

Lowell a few months ago said mmWave reach was often double Verizon's expectations. At Goldman, he added these remarks.

I was in Seoul a few months ago and we were testing the throughput from a transmitter just under 2,000 feet from our location and we were delivering 1.8 gigabits over service over a millimeter wave. And we said just for the fun of it drive that 2,000 feet the opposite direction, get behind the building, so we had absolutely no line of sight and the throughput dropped to 1.4 gigabits.

So we have seen that the foliage doesn't impact as much as we thought, we can penetrate more building structures than we thought, we can go higher in buildings than we thought we assume six floors, we're seeing over 20 floors of elevation in the signal. So we're encouraged by it. And we -- I think the other thing that we've been surprised Brett is that the computing tower and the antennas are very different than anything we've seen before. It literally -- you think about the antennas that we have on the towers today, they are about two or three feet high. You have 32 antennas on the end of your thumb, it's the way this works today and the processing power that the computers and the antennas can deliver has helped the signal conditioning dramatically.

This is the Dawning of The Age of 5G. The song from Hair is playing in my mind.