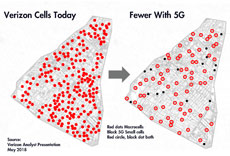 5G is not going to be an expensive network build, according to Verizon, NTT DOCOMO, France Telecom, and Qualcomm. The latest data come from Qualcomm, the only company able to demonstrate a mobile phone sized set of chips. Qualcomm simulations, based on data from several test trials, show existing towers can cover two-thirds of most cities.“Based on our extensive over-the-air testing and channel measurements, significant outdoor coverage  (> 65%) is possible utilizing actual existing LTE sites. The 65% coverage figure is outdoor only. mmWave is blocked by some wall/windows and passes through others. Verizon is using outdoor antennas but hopes to allow customer self-installs indoor.

Upgrading existing cells first drastically brings down costs. Verizon and I believe AT&T are choosing to do most mmWave from existing cells. The illustration is from a Verizon presentation. It shows a dense area where fewer cells are needed in 5G. In areas like this, the greater capacity of the new tech allows shutting down cells. Verizon hasn't given us enough data to know what percent of the network can have fewer cells. They certainly will not be able to reduce the number in rural areas, where they are needed for coverage.

Small cells will continue to be built where capacity is needed. They are a relatively cheap way to serve high demand areas. But Verizon will not need the hundreds of thousands of new cells I and many others once expected.

By the second phase of the rollout, 2023 or 2024, CEO Hans Vestberg predicts equipment costs will be far less, as is typical for telecom equipment. He expects to cover "the entire country" by 2018.

I'm 90% sure Verizon is on target on costs. They have data from thousands of cells active, far more than any other company. CEO Hans Vestberg of Verizon, CTO Seizo Onoe of NTT DOCOMO  both have said 5G will not raise carrier investment significantly, at least in the next few years, The politicians and salesmen who say otherwise are almost certainly wrong, including FCC Chair Ajit Pai, BNetzA chair Jochen Homann, or OFCOM's Sharon White. Carriers and their lobbyists are making ridiculous claims. For example, Deutsche Telecom estimates its costs to be a multiple of what Verizon is spending - for a better network.

Indoor performance varies widely depending on the type of walls and windows. Verizon initially will install outdoor antennas. Going forward, Verizon many customers will be able to . CEO Lowell McAdam early this year promised a gigabit for all. In September, the official announcement instead offers “300 megabits to a gigabit.”

It could probably fall back to the better indoor performance of 4G in many locations. The U.S. carriers are deploying “Gig LTE” across the country. That merges three to five spectrum bands using carrier aggregation, 4x4 MIMO antennas, and 256 QAM improved coding. “Gig LTE” has peak speeds up to 1.5 gigabits and realistically delivers 100-500 megabits.

Most 5G is mid-band: 4G hardware with NR software, only a modest improvement. (Speeds often 100-400 megabits.) Verizon is the only large carrier promising gigabit mmWave.