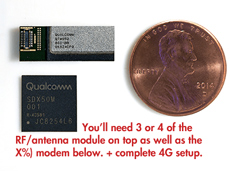 "I told you 5G mmwave phones would be ready by Christmas," email Ted Rappaport, the "Prince of mmWave" and NYU Professor. A second source confirms the likelihood of “a few hundred” phones this year. Qualcomm has now announced they are sampling a small, highly integrated radio frequency and antenna module, the QTM052. I believe they will imminently announce they are sampling the X50 baseband modem and supporting a reference design.

Qualcomm is delivering a year before almost everyone expected the phone. mmWave antennas are really small. One guess is that the little unit at left has 8 of them. The small size of the unit is remarkable. Nothing is certain, of course, until production units are shipping.

Intel, Huawei, and Samsung are chasing as fast as they can as well. Skyworks, Broadcom/Avago, and Qorvo are rushing to have their RF frontends available as well. To protect against U.S. boycotts, the Chinese are speeding research in RF as well.

The early phones will be big, drain batteries rapidly, and very expensive. Few expect large volumes before 2020 and maybe later. No one except Verizon has committed to a major mmWave network this decade, although AT&T, Korea, and China are possible.