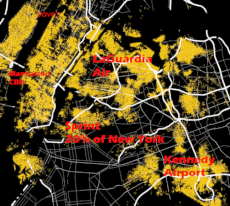 John Saw at Sprint, with an extremely limited budget, covered 11% of the US population in April 2019. Simply by upgrading existing cells, he's covered about 20% of New York, (At the top of the map is where I live.)

He hasn't yet reached most cities in the US or the most populous areas of NY, the black areas on the bottom of the illustration. I believe when he upgrades more cells, Sprint will cover more than half the US population.

In mid-band with Massive MIMO, Sprint's 2.5 GHz has reach comparable to the traditional lower bands. Sprint's 1800 MHz covers 95%+ of the city. The 5G coverage will be similar when the other cells in NY are upgraded.

Sprint's 160 MHz of spectrum at 2.5 GHz is one of the best holdings on earth. Saw already is getting good and sometimes contiguous coverage without adding any new cells.

Could easily be 25%. T-Mobile as part of the Sprint deal committed to selling fixed wireless to 8% of the US. It has guaranteed that 90% of Americans will see mobile broadband service at speeds of at least 100Mbps if the deal is approved.

Goldman Sachs estimates Verizon will sell fixed to about 8% of Americans by then. That's ambitious. It's based on Verizon selling 25% of the market from cable in the ~30M homes Verizon will pass. Most are in the 70% of the US where Verizon has no good landline offering. It is pricing aggressively at $50-70, well under cable's price and offering much higher upstream. Verizon is still moving full speed ahead on mmWave, although Consumer CEO Ronan Dunne recently confirmed many consumers in other locations will be connected at lower speeds in mid and low-band spectrum.

CEO Randall Stephenson of AT&T, who will have a great deal of mmWave capacity to sell in 2021, has specifically said he will have a fixed offering. AT&T does not have landlines in over 60% of the US so will almost definitely sell fixed wireless. It has released no numbers yet, but certainly has plans well into the millions.

If T-Mobile-Sprint goes through, Dish is committed to covering 70% of the US by 2023. The primary product will be fixed wireless and Charlie Ergen is betting $10B he will sell a lot of it. He certainly will sell enough to push up this estimate.

1 network is cheaper than 2 and 2 networks are cheaper than the 4-7 usually required for competition to work its magic. The Chinese government decided the cost of the third network was wasteful and directed the companies to work together. Zhao Aiming of SASAC urged, “The three operators should take the initiative to undertake national tasks and further strengthen cooperation to avoid repeated investment in 5G.”

No one has publicly estimated coverage, but 400,000 bases should serve the heart of most cities. China Tower has over 2 million cells, most of which will be covered by the pair. The announcement spoke of saving $30B in two years. In 2021-2023, it will probably be extended to cover well over 90% of China with 5G and an Edge Network serving more than a billion people.

The typical speed may or may not be more than the 100-500 Mbps down of the other 5G builds. 5G in 200 MHz will provide over 5 Gbps to share. CU & CT can provide a true gigabit to many if that's how they design the network.

They will have 200 MHz of contiguous spectrum at 3.5 GHz, double what every carrier except Sprint and China Mobile are using. The 5G standard only provides for 100 MHz, but Huawei has modified the standard to take advantage of China Mobile's 160 MHz and presumably of this 200 MHz.

Mike Dano at Light Reading reports that Comcast and Charter, who represent the strong majority of US cable, have extended their MVNO with Verizon to 5G. Both companies have been asserting they will build their own substantial networks. One top cable exec, in private, has told me, "We will be huge in wireless."

Neither company will say whether they are reducing their plans for an independent network build. It's possible the companies will use Verizon out of territory while building in territory.

Both companies have a great deal of fiber and physical access to poles and manholes. Their home Wi-Fi can absorb much of the traffic. They can add radios for remarkably little. Everyone in cable thought their cost would be so low that adding wireless networks of their own would be very profitable.

Cable technology is in turmoil.

LG Uplus in Korea sees 5G as a once in a decade chance to change market share. Will the earliest to build 5G gain market share in the West?

Almost certainly, I believe, many people will switch if a different carrier is far ahead in 5G. I cannot prove it, but the enthusiasm among consumers is obvious both East and West. 2M Koreans signed up in 4 months; more than 2M is almost certain in August 2019, the first month in China. Hans Vestberg of Verizon reports people are buying 5G phones even in areas where there is no 5G service.

Britain, Germany, Spain and Italy are probably under 2% coverage in August 2019, little more than pr. The phone prices in the US and Europe are often twice as high as in Asia.

Vivo is shipping a quality 5G phone in China for US$536.

Josh Builta of IHS Markit could be right

I added the question mark because the Chinese price for good 5G phones is already down to US$536. China Mobile and others expect 2020 prices under $300. It would be very surprising if US prices did not come down further and faster than Builla predicts.

Perhaps the US carriers will find a way to keep prices high, I hope not.

Juho Sarvikas, Chief Product Officer, confirmed it would put out a 5G phone next year at "half the current price." I'm sure he doesn't half the China price, now $500-700 for premium phones. More likely, he's thinking half the $1300 price of the Galaxy 10, $500-600. By the time HMD ships, the world price will probably be under $300; it will have to come in around that range to be a good choice.
That's one reason why China has about 3,000,000 5G connections and the U.S. so few none of the companies will admit how slowly they are moving.

A million Chinese bought 5G phones in Huawei's first 14 days on sale. China in August may add three or four million 5G users. In Korea, 2 million signed up in 4 months. Korea has 51 million people. Adjusted for population, 5G  would have 40 million in China or 12 million in the U.S. Germany, Britain, France & Italy have similar populations - and higher incomes - than Korea.

I wrote, Almost all 5G estimates for 2019-2020 need to be doubled. Strategy Analytics, the first mainstream analysis firm to jump in, tentatively raised its 2020 estimate to 80 million in China and 160 million worldwide. My guess is those will prove low. 5G phones are down to US$580 in China and falling to <$300. A reflection:

The best minds of telecom are going mad, starving for data, dragging through the Chinese press for an angry fix. Analysts are doing more than yacketayakking; two have told me their next reports will be very different. These are not teahead joyride neon blinking traffic light,

These are dreams of all who want a great Internet for everyone, no drugs needed. If I'm right, those left behind by a competitor moving faster will face waking nightmares. I hope friends who miss this don't become bleak of brain all drained of brilliance or disappeared into the volcanoes of Mexico leaving behind nothing. I glad no one will be burned alive in their innocent flannel suits on Madison Avenue.

With apologies to Allen Ginzburg, who saw the best minds of his generation destroyed by madness, (very rude link)