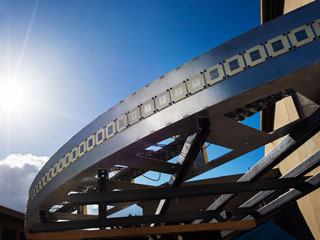 The Facebook PR will get everyone noticing MU-MIMO. The top wireless engineers yawned. They have known for years that you could get extraordinary results from adding antennas and multiple streams. Bristol used 128 small antennas in about eight feet by four feet for a 12X efficiency gain. Facebook used 96 antennas (pictured) for what they considered a 10X gain. These are very early units. Better software and dedicated processors will take speeds higher; Facebook promises ~40% improvement. (Many details and excellent video below.)

20 MHz of spectrum could deliver a gigabit. Early LTE networks, like AT&T, get ~100 megabits. More recent LTE-A networks in Turkey, the Philippines, and many other countries use 60 MHZ and will get speeds well into the gigabits.

An important caveat: MIMO works because the signals from each antenna can be separated by how they bounce off walls, etc. That means that the MIMO gain is much less  in some locations. Line of sight is best for today's systems but not ideal for MIMO. These are ideal figures; at the edge of a cell you get much less.

Arogyaswamo Paulraj invented MIMO in 1993. He predicted twenty years ago that you would one day be able to increase efficiency 100X.

We're not there yet, but Verizon, AT&T, China Mobile, Deutsche Telekom, Telefonica, and Telstra are working hard to develop practical systems. To get to 100X will require faster processors, more efficient analog components, better antennas, improved algorithms and probably some secret sauce.

Paul, who remains active as a Professor Emeritus at Stanford, must be smiling.

Paulraj discusses the invention of MIMO  20 years later, he was joined by three other Marconi Fellows to discuss MIMO 2025: A 10x or 100x Capacity Multiplier? Two years ago, the distinguished engineers predicted what we are now seeing.  http://livestream.com/internetsociety/2014MarconiSocietySymposium/videos/63751991

Here's what Facebook and Bristol/Lund say about their work:

Our other focus is on a transmission technology that is a) spectrally efficient (total number of bits transmitted per unit of radio spectrum bps/Hz), allowing for higher throughput in even the smallest bandwidths, and b) energy efficient (total number of bits transmitted per unit Joule energy spent b/J), allowing for extended coverage range. Project ARIES is our proof-of-concept effort to build a test platform for incredibly efficient usage of spectrum and energy: A base station with 96 antennas, it can support 24 streams simultaneously over the same radio spectrum. We currently are able to demonstrate 71 bps/Hz of spectral efficiency, and when complete ARIES will demonstrate an unprecedented 100+ bps/Hz of spectral efficiency.

Today, 4G cellular and WLAN systems use a technology called MIMO — multiple input, multiple output. The progression toward 5G comes with Massive MIMO, an advanced wireless technology that uses a large number of antennas. ARIES is an embodiment of such a technology — by using the notion of “spatial multiplexing,” the antenna array at the base station can serve a multiplicity of autonomous user terminals on the same time-frequency resource. This spatial resource sharing policy serves as an alternative not only to the need for spectrum licensing, but also the procurement of additional base stations in conventional cell-shrinking strategies. Massive MIMO systems with an excessively large number of antennas have recently gained attention, thanks to asymptotic results on random matrix theory that illustrate how the effects of uncorrelated noise and small-scale fading are virtually eliminated as the number of antennas in a MIMO cell grows large.

Massive MIMO systems are also versatile over a wide range of system parameters. For instance, the beamforming gain afforded by using a large number of transmit antennas may be used to overcome the large path-loss associated with millimeter wave links in urban areas. Alternatively, the beamforming gain may be harnessed at lower frequencies to provide wide-coverage connectivity to rural areas, and this is our focus. Given such promises, the practical and theoretical aspects of massive MIMO systems are being examined for potential beyond-4G wireless communications deployments by standardization entities such as the third generation partnership project (3GPP), and by many industrial base-station and device manufacturers worldwide.

New research by engineers from the Universities of Bristol and Lund, working alongside National Instruments (NI), has demonstrated how a massive antenna system can offer a 12-fold increase in spectrum efficiency compared with current 4G cellular technology.

Multiple antenna technology, referred to as MIMO, is already used in many Wi-Fi routers and 4G cellular phone systems. Normally this involves up to four antennas at a base station. Using a flexible prototyping platform from NI based on LabVIEW system design software and PXI hardware, the Bristol configuration implements Massive MIMO, where 128 antennas are deployed at the base station.

The hardware behind this demonstration was provided to Bristol University as part of the Bristol Is Open programmable city infrastructure. Lund University has a similar setup, the LuMaMi testbed, enabling researchers at both sites to work in parallel with their development.

Bristol's Massive MIMO system used for the demo operates at a carrier frequency of 3.5GHz and supports simultaneous wireless connectivity to up to 12 single antenna clients. Each client shares a common 20MHz radio channel. Complex digital signal processing algorithms unravel the individual data streams in the space domain seen by the antenna array.

The Massive MIMO demonstration was conducted in the atrium of Bristol's Merchant Venturers Building and achieved an unprecedented bandwidth efficiency of 79.4bit/s/Hz. This equates to a sum rate throughput of 1.59Gbit/s in a 20MHz channel.

Professor Andrew Nix, Head of the CSN Group and Dean of Engineering, said: "This activity reinforces our well established propagation and system modelling work by offering a new capability in model validation for Massive MIMO architectures. This is a truly exciting time for our PhD students and opens up further opportunities for collaborative research with our national and international partners."

Ove Edfors, Professor of Radio Systems at Lund University says: "We see massive MIMO as the most promising 5G technology and we have pushed it forward together with partners in Bristol and in our EU project MAMMOET. It is a pleasure seeing those efforts materialize."

Mark Beach, Professor of Radio Systems Engineering in the Department of Electrical & Electronic Engineering and Manager of the EPSRC Centre for Doctoral Training (CDT) in Communications, added: "Massive MIMO is one of four core activities in '5G and beyond' wireless research at Bristol. This demonstration was made possible by the cohort training offered within our CDT in Communications. The CDT gives Bristol a unique edge to conduct activities at scale."

Fredrik Tufvesson, Professor with the Faculty of Engineering at Lund University explained: "It has been an exciting journey, hosting Bristol researchers Paul Harris and Siming Zhang as the group in Lund developed and tested the reference design. Our state-of-the-art test-beds show the culmination of significant effort from many researchers and it is fantastic to see these results from the Bristol deployment."

Paul Harris, PhD student in Bristol, explained: "My PhD training at Bristol alongside a two-month secondment at NI (Austin) put me in a unique position to use this cutting-edge equipment and support my fellow postgraduates with their state-of-the-art research in next generation wireless." Steffen Malkowsky, PhD student in Lund, continued: "Our joint secondment at NI led to a very close and fruitful collaboration that we have now brought back to Europe."

James Kimery, Director of RF Research and SDR Marketing at NI, commented: "With much discussion around 5G, NI is excited to work with top research institutions such as Bristol and Lund universities, and organizations like Bristol is Open to drive the standard forward. This Massive MIMO reference design system demonstrates the power and productivity researchers can achieve with NI tools and technologies."

Paul Wilson, Managing Director Bristol Is Open, remarked: "This is truly outstanding work putting Bristol at the forefront of 5G wireless connectivity. We are looking forward to moving this facility outdoors in late 2016 as part of the BIO Harbourside deployment."

Spectrum and power efficient wireless communications are core to Bristol University's Communication Systems & Networks (CSN) Group and the EPSRC Centre for Doctoral Training in Communications as well as to the department of Electrical and Information technology at Lund University.

Viktor Öwall, Dean of the Faculty of Engineering at Lund University, concluded: "Our openness, very similar goals, backgrounds and structures have enabled this remarkable achievement."