Deprecated: Function get_magic_quotes_gpc() is deprecated in /home/customer/www/wirelessone.news/public_html/libraries/f0f/input/input.php on line 102
 "I am crazy about Massive MIMO," Kitihara of Softbank ordering 1,000's of Massive MIMO bases
Dave 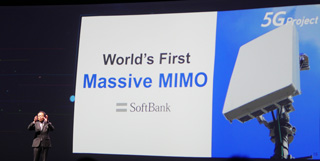 5G is here. China Mobile and Softbank plan thousands of sites. At Huawei's remarkable Tokyo Mobile BBF, both Softbank Japan and China Mobile showed enthusiasm. These are the first large moves in 5G, pulling Massive MIMO at least one year ahead of high-frequency millimeter wave. I believe my report Softbank's Giga Monster Massive MIMO: World's first commercial 5G is not highband millimeter wave was the first in the West. I have since learned that Huawei, as well as ZTE, provided equipment.

Gear that triples capacity (or better) at modest cost is now in production from both Huawei and ZTE. Softbank has 100 base stations up and running. They are mostly in Tokyo but also in several other cities. China Mobile has working systems in two cities. 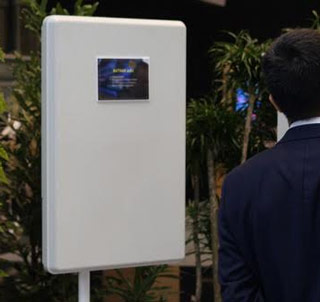 The results of China Mobile's testing were also strong. Huang Yuhong, their 5G lead, tells me they will go into production deployments in 2017. She expects they will move rapidly to volume. China Mobile already has a dense network, with 1.3M bases for their 850M users. That's about 650 users per base station. As subscribers demand more, they need to continue adding capacity.

Robert Clark of Light Reading reports Kitahara intends to use the capacity to improve performance for all users. "We don't care about peak throughput. We want to minimize the low throughput, which is between 1 Mbit/s and 5 Mbit/s." Clark adds, "At those speeds, the network will struggle to deliver a good video experience. Prior to deployment, around 20% of all users were experiencing throughput below 2 Mbit/s." Kitahara reveals, "only a few percent," now receive low speeds. The massive MIMO solution, using 128 transmitters, ensured that users were getting at least 5 Mbit/s data throughput. Kitahara's comment, "I am crazy about Massive MIMO," is also from LR

(My conclusion China Mobile's network is dense comes mostly from a comparison with Verizon and AT&T. They each have between 50,000 and 70,000 bases for well over 100M subscribers each. That's over 1,500 users per cell site. Because of different ways to count small cells and DAS, all comparisons here are imprecise. The gap between the U.S. and China is large enough to make the comparison valid. Robin Bienenstock of Bernstein did a similar comparison between California and Spain and found a similar gap. From Barack Obama to the head of CableLabs, Americans continually assert the U.S. has a great wireless network. They are mistaken; U.S. networks don't match China, Japan, or most of Western Europe.)

Marzetta's book, Fundamentals of Massive MIMO, is being published later this month by Cambridge University Press. I haven't received my review copy yet but knowing Marzetta's work I sure it will be the best on this subject. Meanwhile, check my reporting:

Massive MIMO Explained. What the heck is it? (Updated September 2016)

Shamsunder of Verizon: "We must have MU MIMO"

[Shanghai, China, Nov 8, 2016] On November 4, 2016, China Mobile Shanghai Branch and Huawei jointly deployed the world's first wideband Massive MIMO site. This is another key milestone delivered after the world's first Massive MIMO solution was launched in Shanghai in September 2015. An achievement marking a great leap forward for large-scale commercial Massive MIMO technology and the beginning of a planned series of events outlined in the timetable for 5G large-bandwidth evolution. This solution has significantly improved single site capability in the 4G era indicated by a 5-fold increase, achieving 5-6 Giga capability of a single site.

The Massive MIMO solution is the primary wireless innovation project that China Mobile has predominantly focused on in 2016. This solution can greatly improve 4G network spectral efficiency and help effectively handle any capacity challenges encountered during rapid mobile development. This solution is perfectly suited for the effective enhancement of coverage and interference mitigation capabilities to meet specialized coverage requirements (such as coverage of high-rise buildings). As a significant component of China Mobile's prospective research on 5G technologies, these activities help steer towards an important direction for the further development and future of 5G evolution.

This newly introduced next-generation Massive MIMO solution is oriented specifically towards large-scale commercial use for China Mobile and assumes the lead in providing large-bandwidth capabilities. A single module supports activation of three carriers on 2.6GHz. Distributed network supports smooth evolution to CloudRAN architecture and ensures that hardware is sufficiently prepared and ready for 5G evolution. The average spectral efficiency of cells can be improved by 3-fold. Along with the rapid development of video services, the spectral efficiency can be increased to more than 5-fold. Huawei in-house-developed chips, new materials, and new techniques are used to provide increasingly compact and lighter site equipment. The expedient delivery of this solution is guaranteed as only one optical fiber and one power cable are required to ensure smooth deployment from an engineering perspective. The adoption of the latest chips helps provide processing capabilities 4-fold higher than that of the industry standard, clearly demonstrating the performance advantages inherent to Massive MIMO.

China Mobile has constructed the world's fastest-growing 4G network and must continuously innovate to address growing network development challenges. Shanghai China Mobile will continue to engage in close cooperation with Huawei to develop the capability of applying 5G technologies on 4G networks. The main objectives will be to target new network architectures, service development, continuous innovation, and encourage additional cooperation with partners to improve competitiveness of 4G mobile networks to deliver an optimal MBB user experience.

The future is coming and well worth the wait.

As urbanisation accelerates, high-rise buildings are springing up in cities across China. Poor coverage and call quality in these buildings has become a common issue for many mobile networks. According to China Mobile, complaints about network coverage accounted for 41 percent of all complaints – with more than 70 percent of coverage-related complaints related to indoor coverage. Improving indoor coverage is therefore greatly important for China Mobile’s strategy. In practice, China Mobile has experienced difficulties with site acquisition, property negotiation and indoor deployment.

ZTE’s innovative 3D-MIMO solution sets the bar for indoor wireless performance, with speeds of more than 300Mbps ensuring customers can meet current wireless demands, and a throughput increase of 300 to 500 percent providing commercial networks with the coverage they need.

On December 18 2015, the second International Internet Conference was welcoming more than 2,000 participants from over 120 countries. ZTE’s Massive MIMO provided the conference with telecom services of 530Mbps and spectral efficiency that was five times better than the existing service.