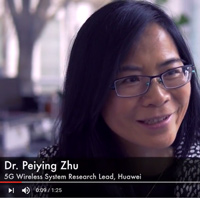 "6G" wireless is technology that is beyond "5G." Minister Wei Leping has already called for China to be the 6G leader, although no one quite knows what it is. Technologies moving from the lab to deployment should improve capacity by 5-15X over "5G." Three technologies will almost certainly be included, with more to come:

"Cell-free" or "Distributed" Massive MIMO. Today, your phone connects to a single cell. If instead you connect to several cells, you often will get much better performance. The operator can tune the network improving things for everyone.  It's easy to see how you could get more capacity on the edge of a cell by connecting to a neighboring cell. These and dozens of other optimizations are becoming possible as the network is controlled by a centralized RAN. The calculations required are becoming practical as Moore's Law continues to drive down the cost. The receiver needs more antennas, so you'll probably see this first in fixed wireless. There are hundreds of academic articles on how to make this work. Steve Glapa believes Tarana Wireless is close to delivering some of this capability. See 5G Future Might Be "No Cell Networks" with video of Peiying Zhu of Huawei.

Dynamically use different frequencies, especially unlicensed. FCC Chief Technologist Henning Schulzrinesaid in 2017 "All new spectrum is going to be shared. Imagine if when Verizon is running out of spectrum, they could instead use anything fallow at Sprint or AT&T. Each carrier has different traffic patterns. There is usually excess but currently no way to put it to use. Share everything, you learned in kindergarten. Today's phones can handle two dozen spectrum bands, even if true software defined radio is not down to consumer prices.

Verizon & Qualcomm have shown this can work and LAA is part of the 3GPP standard. They listen to see if some of the Wi-Fi spectrum isn't being used. If it's quiet, which is most of the time, they use the spectrum. It can and should be extended. The telcos need exclusive access to some spectrum for signaling and emergency use. That would probably be 20-40 MHz, and more than half the spectrum they currently monopolize can be turned back.  See Sharing Works in Almost All Bands: Malladi of Qualcomm

Frequencies up to 120 GHz. 5G in 3GPP Release 15 goes up to 54 GHz. WiGig is working at 60 GHz. Many radios run at 70 GHz to 90 GHz, although they currently are too expensive for consumers. Many are testing past 100 GHz, claiming excellent results. The U.S. FCC is working on rules for those bands.

Some of these "6G" techniques are already reaching the market, even before 5G is deployed.