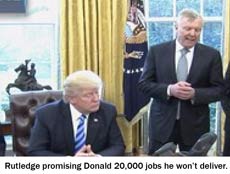 No. CEO Tom Rutledge goes too far claiming "Using unlicensed and licensed Spectrum working together" as a definition of 6G. T-Mobile did that years ago, and BT and many other Europeans have long treated Wi-Fi as part of their network. LAA, taking over Wi-Fi spectrum for LTE, is one of the pillars of 3GPP Rel. 15.

Sorry Tom: you run a tight operation and sell well, but next time ask your engineers before you say something like that. This is just the first of many claims to expect. The marketing folks will try to put the name "6G" on whatever they happen to be selling.

There are massive inefficiencies in how LTE and 5G work with Wi-Fi. The telcos wrote their 3GPP rules knock out many WI-Fi signals; the IEEE Wi-Fi people and the cablecos protested but were ignored. Both telcos & Wi-Fi are moving to more efficient cloud management, increasing capacity. As far as I know, that's moving on separate, incompatible tracks. 5G does not have either a fair or efficient means to share spectrum with Wi-Fi. Doing that well might be a goal for 6G, although the industry politics look daunting. Charter's given no signs they are close to that.

Our 5G wireless tests are also going well, as are our 6G tests, which is our pre-spec definition of the integration of small cell architecture using unlicensed and licensed Spectrum working together interchangeably with our advanced DOCSIS roadmap to create high capacity, low latency product offerings.

We expect that over time, our existing infrastructure will put us in a unique position to economically deploy new powerful products that benefit from small cell connectivity. In 2017, we announced the partnership with Viacom and AMC, which will produce original content for the Spectrum video platform before subsequent windowing.