Carriers have to decide whether they want to offer ~15 ms latency or 25-45 ms latency. 25-45 ms is inexpensive because it requires very few servers, The number of servers and the cost is much higher for ~15 ms. (1 ms works in the lab but it will be years before it is widely deployed. I wish politicians would stop lying about that.)

Choosing where to put Edge Servers is one of the most crucial decisions to make in advanced networks. Very few are certain the demand is there and confident about spending heavily. In the diagram (larger below), I point to 4 Levels at different speeds and costs. 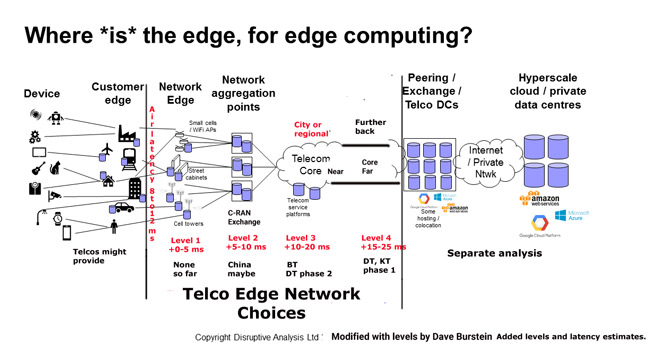 Every network is different. To simplify things, I offer four logical points for telco servers.

Level 1 - At towers and cells for 10-15 ms. No one except possibly the Chinese is discussing this for the next 5 years. Too expensive

Level 2 - 1-3 hops back, C-RAN or exchange, 15-20 ms. Most engineers think this is ideal, but the investments haven't been approved.

Level 3 - A little further back, at a city or regional hub. BT is suggesting 1000 servers would be right for the UK.

Level 4 - At a limited number of national aggregation points but still within the telco network. DT is beginning with 7-14 servers, KT with 6. Latency might be 25 ms.

My opinion is that almost every carrier should offer at least a Level 4 network, building a market without committing much capital/

Verizon says the latency on its 5G network is 30 ms; actual tests are a little better. Verizon and AT&T have demonstrated in the lab that Edge Servers fairly close - what I call a Level 2 cloud - can deliver 15 ms.

Minister Miao Wei 18 months ago set a goal of 90% of China within 25 ms of a server. The telcos are almost certain to build what he wants. The technology is improving so rapidly they may do better than that. China Telecom may delay a large investment until after 2021, however.  Yang Xin believes there is still a problem with the business model.