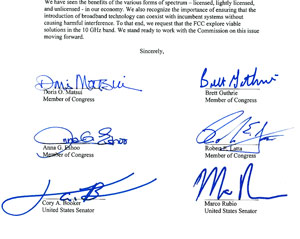 Brian Hinman of Mimosa, an old friend, has led the drive to open a massive 500 MHz of the 10 GHz band now used for amateur radio. That would almost double the total WiFi spectrum. 10 GHz has limited range except with line of sight. A natural use of the band is for backhaul for wireless ISPs, who often design networks around line of sight possibilities. The alternative use, which is mentioned in early U.S. proposals to the ITU, is for earth sensing satellites.

2.4 GHz WiFi is already often crowded and 5 GHz is starting to fill up. An ISP engineer implementing WiFi gateways tells me his company already has to bring down energy levels in apartment buildings or performance suffers. The telcos are trying to steal a big hunk of WiFi spectrum for their own (very expensive) networks.

The FCC has a powerful incentive to stop LTE-U, beyond the obvious harm to WiFi. Giving the free spectrum to telcos lowers their incentive to bid in the 600 MHz spectrum auction, soon come. The FCC is promising a great deal of money to the treasury from that auction. A failure would be a major political problem.

ESS is valuable, but certainly most of the value can be achieved with far less than 500 MHz, $50B+ of value in the U.S. alone. When technology made use of bands above 6 GHz expensive, these bands were little used. Today, better chips make high band use affordable. My take is that it's massive negligence not to open more frequencies for public use.

Both Republicans and Democrats support more spectrum. "Some issues are neither Republican nor Democrat" then FCC Chair Kevin Martin once said to me. More spectrum for everyone - unlicensed or lightly licensed - is proving popular for both. Republicans Latta, Guthrie and Rubio joined liberal Democrats asking the FCC to move this forward.

Hinman's company, Mimosa, is (finally) shipping their MIMO 4x4 basestation with speeds "up to" a gigabit for less than $1,000. We've been waiting for that since Quantenna announced the chip. Mimosa has a somewhat slower version for $299. On the terrain where they will work well, this may be a breakthrough. I'm less sure about the market they will find in areas already covered by multiple LTE providers. Mimosa operates in the 5 GHz band, which is likely to become very crowded in the next few years. Freeing spectrum at 10 GHz will improve things and Brian has started proceedings at the FCC.

Thanks to Lydia Beyoud of Bloomberg BNA, whose article pointed me to this story.

Below, opposition from the radio amateurs and Hinman's blog.

The US proposal for World Radiocommunication Conference 2015 (WRC-15) Agenda Item 1.12 — to expand the Earth Exploration Satellite Service (EESS) in the vicinity of 10 GHz — supports allocating an additional 600 MHz of spectrum to the EESS (active) as a primary allocation in the frequency band 9.9-10.5 GHz, with certain limitations. The Amateur and Amateur-Satellite services have secondary allocations of 10.0-10.5 GHz and 10.45-10.5 GHz, respectively; the only current primary allocation is to Radiolocation. A study conducted by a Working Party of the International Telecommunication Union Radiocommunication Sector (ITU-R) concluded that the interference potential of EESS (active) to Amateur Radio was limited to very brief and infrequent periods.

“In this hotly contested frequency range, the best we can hope for is that sharing partners will be compatible with continued amateur access, and that is the case here,” ARRL CEO David Sumner, K1ZZ, commented.

The US proposal does not include adding the United States to a “country footnote” that allocates the 10.0-10.45 GHz band to the fixed service in some Region 2 countries — a position advocated by Mimosa Networks and strongly opposed by the ARRL. more

The 10 GHZ and up contest

The objective of 10 GHz and Up is for North American amateurs work as many amateur stations in as many different locations as possible in North America on bands from 10-GHz through Light. Amateurs are encouraged to operate from more than one location during this event. See the detailed rules for restrictions.

CAMPBELL, Calif., March 3, 2015 – Mimosa Networks, a pioneer in gigabit wireless technology, strongly endorses the bipartisan letter recently issued by Members of the House and Senate, requesting that the Federal Communications Commission (FCC) explore commercial use of the 10 GHz band for broadband services. Members on both sides agree that the “well documented spectrum crunch” presents compelling reasons to pursue “sharing opportunities” in the 10 GHz band.

Mimosa views the Congressional letter as an important step forward in its own efforts to share use of the 10 GHz spectrum band to expand affordable, high-speed Internet access to both rural and urban Americans. In 2013, Mimosa submitted a Petition for Rulemaking to the FCC seeking to allocate the 10.0 – 10.5 GHz band for lightly licensed fixed wireless broadband use. In March 2014, the FCC issued a Public Notice seeking comment on Mimosa’s Petition for Rulemaking.

Mimosa’s CEO, Brian Hinman said, “Mimosa applauds the bipartisan group of Members for coming together to recognize the future potential of the 10 GHz band. We look forward to continuing to work with the FCC toward a Notice of Proposed Rulemaking to share use of the 10 GHz band in the near future.”

Because of its physical characteristics, the 10 GHz band is particularly well-suited to providing long distance, high capacity links for broadband access to end-user customers, including underserved rural customers, and for cellular backhaul.

Chuck Hogg, the President of WISPA, the primary representative organization for the development and advancement of fixed wireless Internet service providers, said, “Our industry is greatly encouraged by the letter issued by the United States Congress regarding the exploration of the 10 GHz band for use in broadband services. As broadband expansion becomes increasingly important to our nation, seeking out and reallocating underutilized spectrum will become more and more vital.”

For more information on the Mimosa Petition or to read the letter from Congressional Members in support of expanding the use of the 10 GHz spectrum, visit the Mimosa website (www.mimosa.co/10GHz).

View the Congressional letter of support.

back to top
LAA