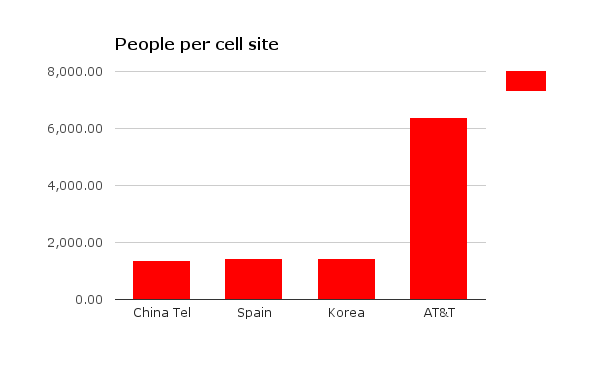 AT&T, Verizon cram 3-5 as many people on each cell site. AT&T has 50,000 cells, China Mobile 1,000,000, SK Korea 35,000, Spain 33,000. Currently, Albania, The Maldive Islands, and at least a dozen other countries have faster LTE networks than the USA. The chart is adjusted for population and AT&T obviously stands out. Verizon would be similar.

Since 2000, U.S. wireless networks have been far less reliable than many in Europe and East Asia, except for a brief period around 2010-2011.

Verizon built the world's first large LTE network. There was no good way to improve their 3G CDMA system to 3.5G. They took a chance and LTE worked really well for them. The technology imperative was clear and explained publicly by top Verizon officials.

Verizon had much of the U.S. covered by the end of 2010. The network, designed for 6-12 megabits down, was much faster than previous 3G nets. By 2012-2014, many telcos had also delivered LTE but tailored their networks to deliver 20 to 100+ megabits most of the time. In 2015, many have upgraded to two band carrier aggregation, allowing speeds over 200 megabits in many cases.

"Verizon 4G LTE wireless broadband is 10 times faster than 3G—able to handle download speeds between 5 and 12 Mbps," Verizon advertises as I write this in early October 2015. Their actual network is similar to those regularly reaching 50-100 megabits but VZ doesn't try to match that. Like AT&T in the chart, they have far more customers per cell site and hence more crowded networks

Robin Bienenstock. then a top London analyst, pointed me to the poor USA networks a few years ago.

“Let's take California and Spain as an example. Telefonica has some 33,000 base stations in Spain (yes, miserable, economically imploding Spain). Conveniently, California is a similar size, has a similar topography, and has very similar population density. In California, AT&T has just over 6,000 base stations. The spectrum allocation per pop in these two operators (TEF in Spain and AT&T in California) is remarkably similar. A similar analysis looking at New Jersey and Massachusetts vs the Netherlands shows similar results.

"Why are European networks so much denser than American networks? In large part the answer lies (again) in regulation. In Europe, the spectrum auctions of last decade came with 'use it or lose it clauses' that obliged operators to build a minimum of base stations or face sanctions from fines to loss of spectrum. The result is clear to any American visiting Europe… and more frustratingly obvious to any European visiting the States.”

Verizon and AT&T will soon offer higher speeds, maybe even the "up to 100 megabits." But the limited number of cell sites will mean they continue inferior to many others. Sascha Sagan of PC Magazine reports field tests at Sprint uver 100 megabits, the kind of speed becoming common around the world. But average speed in his testing was under 20 megabits.

Sources: There is no strict definition of a "cell site," much less a public count. Does one count small cells, DAS, etc? I'm convinced the analysis here is on target, although the individual numbers are best estimates. Anyone with better data, please share.