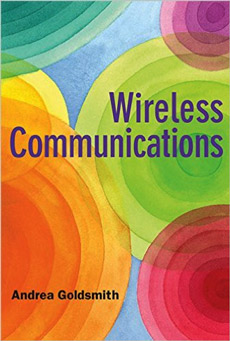 Essentially, beamforming focuses the radio signal. It's concentrated and stronger to an individual receiver such as a mobile phone or WiFi. It's sometimes described as "steering" the signal. It's been used in radar and sonar for decades. More recently, it's common in 802.11ac WiFi and built into some wireless standards. As processing power becomes cheaper with Moore's Law, more powerful systems become practical.

For a mental picture, think of a lamp without a shade as the wireless router: The bulb (transmitter) radiates light (data) in all directions.

Devices that support beamforming focus their signals toward each client, concentrating the data transmission so that more data reaches the targeted device instead of radiating out into the atmosphere. Think of putting a shade on the lamp (the wireless router) to reduce the amount of light (data) radiating in all directions. Now poke holes in the shade, so that concentrated beams of light travel to defined locations (your Wi-Fi clients) in the room."

Here's a slide from Goldsmith's 2014 class notes followed by the Wikipedia article. 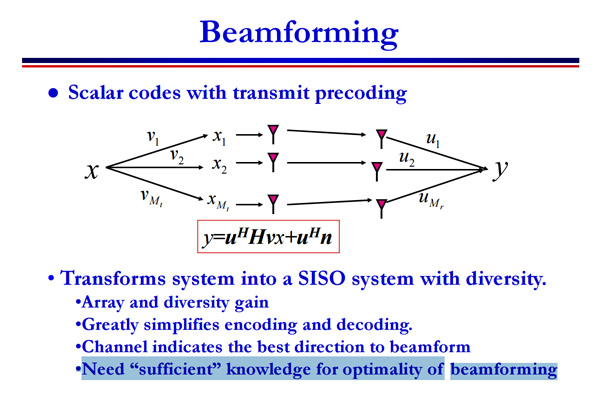 From Wikipedia, the free encyclopedia
Beamforming

Beamforming or spatial filtering is a signal processing technique used in sensor arrays for directional signal transmission or reception.[1]This is achieved by combining elements in a phased array in such a way that signals at particular angles experience constructiveinterference while others experience destructive interference. Beamforming can be used at both the transmitting and receiving ends in order to achieve spatial selectivity. The improvement compared with omnidirectional reception/transmission is known as the receive/transmit gain(or loss).

Beamforming can be used for radio or sound waves. It has found numerous applications in radar, sonar, seismology, wireless communications, radio astronomy, acoustics, and biomedicine. Adaptive beamforming is used to detect and estimate the signal-of-interest at the output of a sensor array by means of optimal (e.g., least-squares) spatial filtering and interference rejection.

To change the directionality of the array when transmitting, a beamformer controls the phase and relative amplitude of the signal at each transmitter, in order to create a pattern of constructive and destructive interference in the wavefront. When receiving, information from different sensors is combined in a way where the expected pattern of radiation is preferentially observed.

For example in sonar, to send a sharp pulse of underwater sound towards a ship in the distance, simply transmitting that sharp pulse from every sonar projector in an array simultaneously fails because the ship will first hear the pulse from the speaker that happens to be nearest the ship, then later pulses from speakers that happen to be the further from the ship. The beamforming technique involves sending the pulse from each projector at slightly different times (the projector closest to the ship last), so that every pulse hits the ship at exactly the same time, producing the effect of a single strong pulse from a single powerful projector. The same thing can be carried out in air using loudspeakers, or in radar/radio using antennas.

In passive sonar, and in reception in active sonar, the beamforming technique involves combining delayed signals from each hydrophone at slightly different times (the hydrophone closest to the target will be combined after the longest delay), so that every signal reaches the output at exactly the same time, making one loud signal, as if the signal came from a single, very sensitive hydrophone. Receive beamforming can also be used with microphones or radar antennas.

With narrow-band systems the time delay is equivalent to a "phase shift", so in this case the array of antennas, each one shifted a slightly different amount, is called a phased array. A narrow band system, typical of radars, is one where the bandwidth is only a small fraction of the centre frequency. With wide band systems this approximation no longer holds, which is typical in sonars.

In the receive beamformer the signal from each antenna may be amplified by a different "weight." Different weighting patterns (e.g., Dolph-Chebyshev) can be used to achieve the desired sensitivity patterns. A main lobe is produced together with nulls and sidelobes. As well as controlling the main lobe width (the beam) and the sidelobe levels, the position of a null can be controlled. This is useful to ignore noise or jammers in one particular direction, while listening for events in other directions. A similar result can be obtained on transmission.

For the full mathematics on directing beams using amplitude and phase shifts, see the mathematical section in phased array.

Beamforming techniques can be broadly divided into two categories:

Conventional beamformers use a fixed set of weightings and time-delays (or phasings) to combine the signals from the sensors in the array, primarily using only information about the location of the sensors in space and the wave directions of interest. In contrast, adaptive beamforming techniques generally combine this information with properties of the signals actually received by the array, typically to improve rejection of unwanted signals from other directions. This process may be carried out in either the time or the frequency domain.

As the name indicates, an adaptive beamformer is able to automatically adapt its response to different situations. Some criterion has to be set up to allow the adaption to proceed such as minimising the total noise output. Because of the variation of noise with frequency, in wide band systems it may be desirable to carry out the process in the frequency domain.

Beamforming can be computationally intensive. Sonar phased array has a data rate low enough that it can be processed in real-time in software, which is flexible enough to transmit and/or receive in several directions at once. In contrast, radar phased array has a data rate so high that it usually requires dedicated hardware processing, which is hard-wired to transmit and/or receive in only one direction at a time. However, newer field programmable gate arrays are fast enough to handle radar data in real-time, and can be quickly re-programmed like software, blurring the hardware/software distinction.

Sonar itself has many applications, such as wide-area-search-and-ranging, underwater imaging sonars such as side-scan sonar and acoustic cameras.

Sonar beamforming implementation is similar in general technique but varies significantly in detail compared to electromagnetic system beamforming implementation. Sonar applications vary from 1 Hz to as high as 2 MHz, and array elements may be few and large, or number in the hundreds yet very small. This will shift sonar beamforming design efforts significantly between demands of such system components as the "front end" (transducers, preamps and digitizers) and the actual beamformer computational hardware downstream. High frequency, focused beam, multi-element imaging-search sonars and acoustic cameras often implement fifth-order spatial processing that places strains equivalent to Aegis radar demands on the processors.

Many sonar systems, such as on torpedoes, are made up of arrays of up to 100 elements that must accomplish beam steering over a 100 degree field of view and work in both active and passive modes.

Sonar arrays are used both actively and passively in 1-, 2-, and 3-dimensional arrays.

Sonar differs from radar in that in some applications such as wide-area-search all directions often need to be listened to, and in some applications broadcast to, simultaneously. Thus a multibeam system is needed. In a narrowband sonar receiver the phases for each beam can be manipulated entirely by signal processing software, as compared to present radar systems that use hardware to 'listen' in a single direction at a time.

Sonar also uses beamforming to compensate for the significant problem of the slower propagation speed of sound as compared to that of electromagnetic radiation. In side-look-sonars, the speed of the towing system or vehicle carrying the sonar is moving at sufficient speed to move the sonar out of the field of the returning sound "ping". In addition to focusing algorithms intended to improve reception, many side scan sonars also employ beam steering to look forward and backward to "catch" incoming pulses that would have been missed by a single sidelooking beam.

Beamforming techniques used in cellular phone standards have advanced through the generations to make use of more complex systems to achieve higher density cells, with higher throughput.

Beamforming can be used to try to extract sound sources in a room, such as multiple speakers in the cocktail party problem. This requires the locations of the speakers to be known in advance, for example by using the time of arrival from the sources to mics in the array, and inferring the locations from the distances.

Compared to carrier-wave telecommunications, natural audio contains a variety of frequencies. It is advantageous to separate frequency bands prior to beamforming because different frequencies have different optimal beamform filters (and hence can be treated as separate problems, in parallel, and then recombined afterward). Properly isolating these bands involves specialized non-standard filter banks. In contrast, for example, the standard FFT band-filters implicitly assume that the only frequencies present in the signal are exact harmonics; frequencies which lie between these harmonics will typically activate all of the FFT channels (which is not what is wanted in a beamform analysis). Instead, filters can[citation needed] be designed in which only local frequencies are detected by each channel (while retaining the recombination property to be able to reconstruct the original signal), and these are typically non-orthogonal unlike the FFT basis.

adcast in a specific direction. Wikipedia has a good article on beamforming.