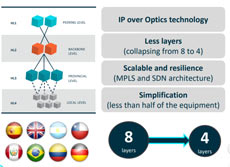 Enrique Blanco of Telefonica is collapsing his transport network from 8 to 4 layers. Lee Hicks of Verizon is "Ripping out 200,000 pieces of equipment as part of Verizon One Fiber." He is replacing them with one-tenth as many boxes. Cost and simplicity are the main goals, but latency is being dramatically improved as well.

I've recently discovered that the latency of the radios for the last 200 metres (the 5G NR) often is less important than the performance on the backbone. From the radio to the Internet typically takes 15 ms to 50 ms and more. 5G to the radio is now typically 10 ms, compared to 20 ms on LTE. That saves about 10 ms.

A better backbone (or an Edge Cloud) can reduce latency by 10-30 ms. Today's routers are much more powerful and much faster. Like most incumbent telcos, Verizon's network was loaded with out of date equipment, some 20 years old. Most carriers are slowly replacing older gear. Verizon One Fiber is replacing almost everything.   Lee Hicks of Verizon is rebuilding that network with a goal of 5-15 ms.

(That number is mine. Neither Lee nor anyone else at Verizon has discussed a figure. I'm inferring it from the capabilities of the equipment.) That will generally save 10-30 ms, more than the improvement with 5G radios.  "At the end of the day, I'm going to have about a 90% reduction in routers in the network. I'm going to be left with a dramatically smaller amount of equipment. I'm going to have about 10% of what I have today by the time we're done." (Over the years, Verizon built separate networks for wireline, wireless, corporate data, ...)  One Verizon is delivering results. The new equipment "saves half" just in the first year. Overall, Verizon is reducing cost per bit by about 40% per year. As traffic growth slows towards 30%, margins are likely to expand.  The rebuild is producing an enormous impact on latency, although Verizon has never discussed the details. In addition, Verizon is deploying servers strategically throughout the network, often at aggregation points. They are using  Calix 40 gigabit NG-PON2 for backhaul with the AXOS operating system, about which I hear good things. I call Verizon's network the most advanced in the world because they are one of the few with much mmWave and are also rebuilding the backbone.