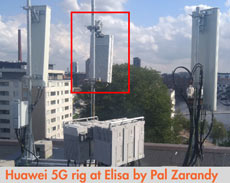 Pal Zarandy, an always interesting analyst, tested Elisa's "world's first" 5G network from inside his office and outside with line of sight. The results were as expected: 5G at 3.5 GHz and Massive MIMO performs about the same as a good 4G network. "Gigabit LTE" - with tested speeds in the low or mid hundreds of megabits - has been shipping since 2016. Adding a minor software tweak, NR, and calling it "5G" did little to improve performance. (The battle to limit the term "5G" to true high-speed millimeter waves has been lost, unfortunately.) This is the dirty secret of "5G." Almost all the claimed new uses can be met with 4G. Anyone who doesn't know that should ask an engineer.

The Elisa results are important because they confirm that Massive MIMO makes 3.5 GHz spectrum practical to use. Pal writes:

"I think this is the key: 'Compared to gigabit LTE, the game changer features of the 3.5 GHz band won’t be single user speeds but instead the aggregate mobile data network capacity. This we couldn’t (and were not planning to) test, but Elisa’s network experts confirmed our views.'

Using 64 transmit antennas, Elisa in 3.5 GHz spectrum is getting throughput in a range similar to 8 antennas in 1.8 GHz. Without far more data, I can't be more specific than that. It may turn out that 100 Mhz in 3.5 GHz delivers about the same capacity as 60 MHz in lower bands. Because higher frequency antennas are smaller, even 128 antennas can be a reasonable size and not prohibitively expensive.

Between 3.5 GHz and 4.2 GHz is enough spectrum to roughly double the capacity of today's networks.

Most of that spectrum is very lightly used. With political will, it could be made quickly available.

Less than half the capacity is being used at Verizon, AT&T, Sprint, and probably most other networks around the world (except India.) Verizon hasn't implemented 4x4 MIMO across most of the network yet and is only using 50-60% of their spectrum. Add a modest number of small cells to fill in where needed, Bring in 3.5-4.2 GHz.

The increase in capacity could be 5-10X with about today's level of capex or lower and without much mmWave. Traffic growth in the U,S. in 2017 was only 15% according to the telcos at CTIA, but I think that's an anomaly. A more realistic assumption for surprise-free demand is growth about 30%/year. Put another way, most telcos could meet the demand they expect until 2025 or 2030 without going to millimeter wave. That's why very few, including almost no one in Europe, intends large mmWave builds at this time.

Surprises happen, of course. Hans Vestberg at Verizon is determined to use the capacity of his mmWave network to knock down the competition. That would blow any current projections.