Even at twice that rate, every prediction is blown out of the water. While "experts" and especially policy people worry about growth rates they think are 50% and 70% per year, the industry has long known the real growth is falling well below that. Cisco's VNI, the best public forecast, has projected growth to fall to 30%. The higher rates were an anomaly brought on by the introduction of smartphones. As smartphones approached saturation, the growth has been falling.

CTIA, the U.S. wireless association, combines the figures direct from Verizon, AT&T, Sprint, T-Mobile, and enough others to cover over 95% of usage. It should be highly reliable. However, I suspect there is an anomaly in the data for some reason; the individual companies have been telling Wall Street they have higher growth. As it is, I assume there is an artifact of a changed definition or something and the rate will go up in the next year's report.

Yet another DC type got this wrong two weeks ago. "Americans’ appetite for mobile services is insatiable." Hogwash.

CTIA also reports 15,000 more cell sites. That's consistent with other reports that the telcos are finally deploying. Separately, CTIA predicts 300,000-400,000 small cells in the next three years. Verizon's recent results show much better than expected rate/reach for millimeter wave, so that is probably a high estimate. Subscribers are about flat.

The absolute growth remains substantial because the base is higher. Fortunately, wireless productivity is going up even faster. One Verizon estimate is 40% per year.

It has not escaped my notice this data immediately suggests policy reconsideration. 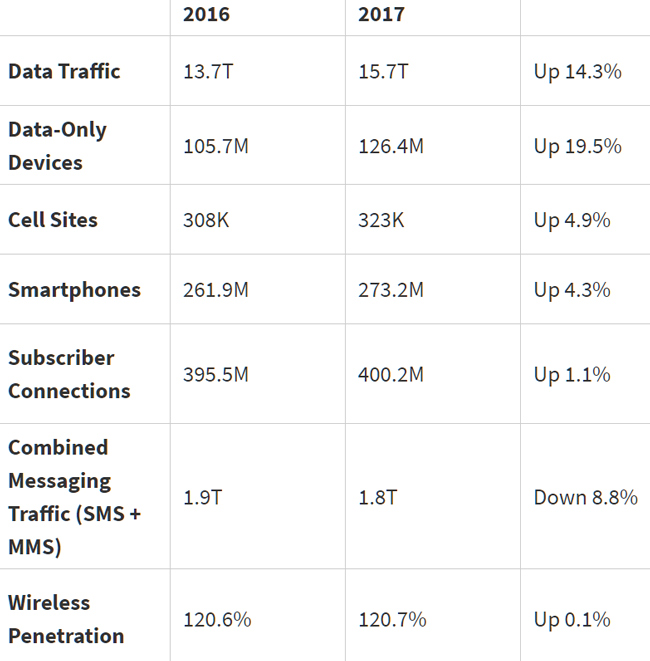